The Gateshead Sage is a music center that is situated in the North of England but has an International profile. 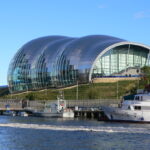 The facilities are predominantly split into two sections. One is a concert music venue and the other is that it is an area for musical education. Based on the South Bank of Gateshead, it first opened its doors in 2004 and is predominantly occupied by the North Music Trust.

Planning began back in the early 1990s and work finished on the construction and opened in December 2004. The cost of the development of the building was over £70 million and received a large amount of funding through the National Lottery.

The building is an impressive glass construction with stunning views of the Gateshead Millenium Bridge and the Newcastle Quayside. The Sage compromises three different sections with the largest seating of 1700, 450, and a smaller rehearsal area. The spaces were set out in order to create the perfect acoustic properties. This was achieved by using a special “spongy” concrete that enables the absorption of vibrations. The building even has ceilings that can be raised or lowered to change the acoustics depending on the needs of the music that is being played.

The Sage has been a host to many many artists such as Local North East artist Sting and international bands like Blondie and De la Soul.

The building is open every day and it is worth just walking through to experience the size of it. If you are looking for other things that you can do in the area, you should also take a visit to the National Trusts Gibside Chapel.

If you are looking for a Boiler Service you should visit our home page to book a service.